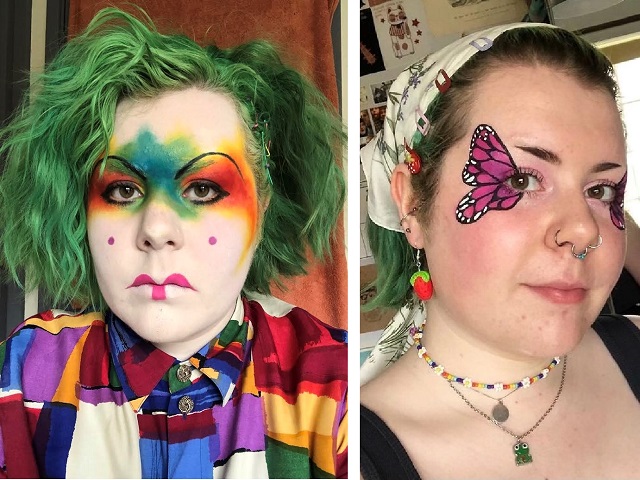 A talent for creating unique makeup looks has gained a highly-skilled HSDC student a place in the finals of WorldSkills UK.

Lily, who studied Level 3 Theatrical, Special Effects Hair and Media Make-Up at HSDC, is one of just eight people from across the country competing in the final for Commercial Makeup.

“I am 19 and have been interested in makeup and special effects since I was 11 or 12, so to make it this far in the WorldSkills competition is amazing and I am so excited to be competing in November.”

For the first part of the competition, Lily had to take part in a passive round in which she designed a mood board, face plans and gave an explanation of why she had created the look.

Lily then created her colourful makeup look to the theme of ‘Out of the Box’ and sent in photos to WorldSkills, which won her a place in the second round.

“Due to the problems surrounding COVID, competitors then had to go onto a live meeting from home and carry out their look. This was a challenge in itself and to Lily’s credit she did what she always does and met the challenge head on.

“WorldSkills is very competitive, and it means that as a competitor you have to want to succeed as the responsibility is on you to plan, show and test your skill. We have in recent years only got through to the second round and have been a few points off the final round. Lily is proof that hard work and determination has paid off.”

Lily will compete alongside other finalists and showcase her skills in a bid to win gold, silver or bronze at Coleg Cambria in Wales in November. She added:

“Applying to the competition was a bit scary because I have never done anything like it before, but it was also very exciting and I’m glad I applied and have the opportunity to compete in the finals now.

“The brief was ‘out of the box’ which meant we could basically do anything, as long as it showed off our creativity, which was great because I love creating makeup looks that are a bit out of the ordinary.”

Visit our Hair & Beauty pages to learn more about studying these subjects at HSDC.