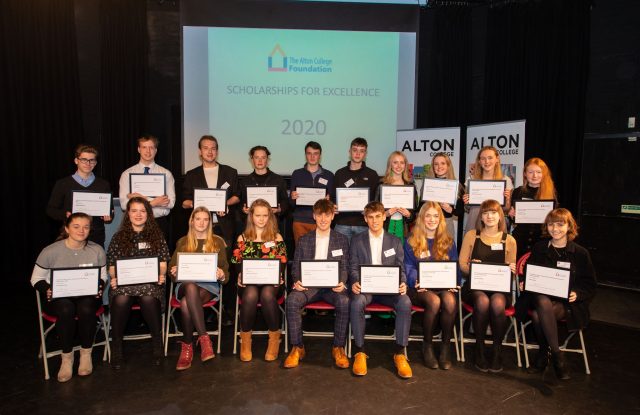 Trevor Heley, Managing Director of the Foundation, opened the 18th Annual Scholarships for Excellence Awards at the end of February by welcoming students, parents, sponsors, College staff, Governors and the Foundation Directors who were in the audience to celebrate the achievement of the successful scholars.

He congratulated the new scholars who between them bring the total number of HSDC students awarded scholarships, since the scheme began in 2002, to 329. Mr Heley thanked past and present sponsors and donors for their generosity in not only providing scholarships but also grants to students and donations to the College. He also thanked College staff for their valuable support for the scheme and paid tribute to the incredibly high calibre of applications this year and the subsequent outstanding quality of the winning students.

Subject awards ranged from Science and Medicine to Music and Modern Foreign Languages. A full list of award winners can be found by clicking here. The invited guest speaker, Kate Maria, received a scholarship in 2003 and highlighted in her speech how it had given her the confidence to succeed in her studies and her current career.

The evening was brought to a close by Mike Gaston, Principal and Chief Executive of HSDC. He thanked the Foundation, local community, sponsors and donors and his staff for their important role in the selection process. Mr Gaston praised the outstanding quality of all the applicants and congratulated those receiving scholarships.