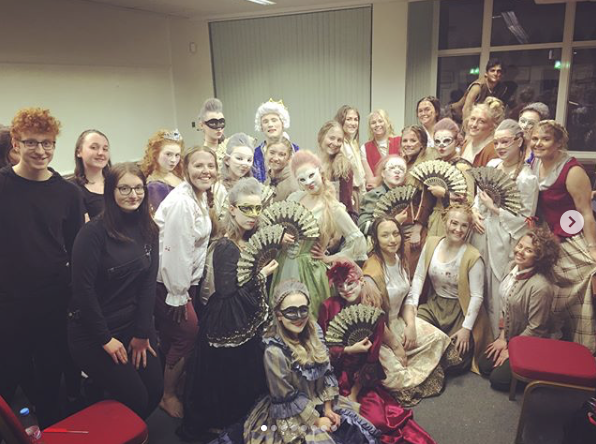 A group of 22 dance students from Havant & South Downs College stole the show at the first regional heat of Global Rock Challenge on Monday.

Rock Challenge is an international dance competition for schools and Colleges. Each group puts together a five to eight minute routine based on a story and performs it against other competing teams.

HSDC’s piece was called “Let them eat cake” and the story starts in Paris in 1793. As the upper class indulge on food and finery, the poor are left to starve and perish. Riots break out and France is in conflict.

Lecturer Sarah Parsons said: “The choreography came mostly from the students under the direction of dance teacher Andreanna Poulaki. Set was constructed by Peter Ebeling and we worked collaboratively with the BTEC Acting students who took on the role as stage crew and also worked with theatrical hair and makeup students.

“We were all shocked as we thought there were a lot of really good schools competing, and when you watch the other schools rehearsing you do feel pangs of worry about whether you have done enough to make your work stand out.

“When we heard we won we were completely elated, we were jumping out of our seats and screaming hysterically. None of us have got any sleep because we are so excited.

“The students and staff have worked so hard to represent our College on such a large scale so it feels like a personal victory too.”

The three judges graded the HSDC team’s work using a set of criteria. If you score more the eight out of ten you win an award for excellence. HSDC dance group won an award for excellence in:
The talented group will be performing again on 26 April, competing against other schools and Colleges who came first place in their regional competitions.