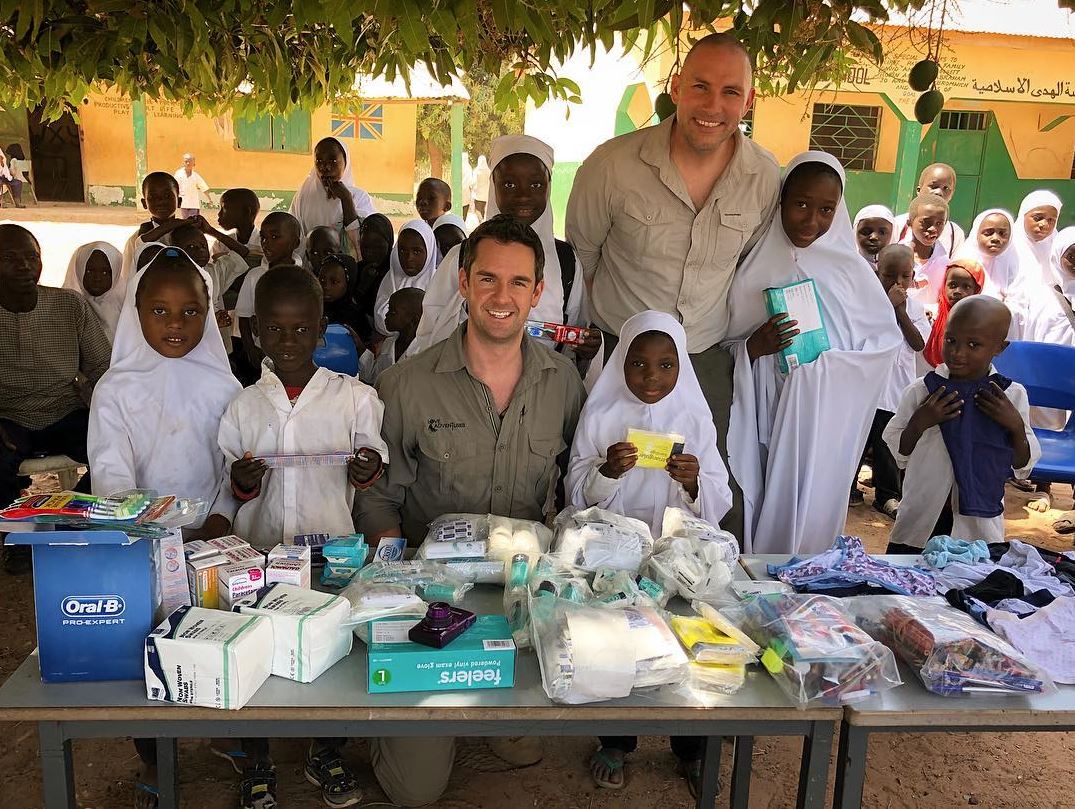 A Sport and Public Services lecturer from HSDC spent his Easter break travelling The Gambia donating vital supplies to projects in need.

Martyn Bell and his friend Dave Love journeyed across the smallest country in West Africa for ten days, dropping off much-needed medical supplies and stationery donated by staff at Havant & South Downs College.

Speaking about his travels, Martyn said: “A friend of mine, Dave, is a Major in the Royal Military Police and he’s heavily into his travel and adventure. We came up with the idea of circumnavigating in The Gambia whilst visiting a number of projects along the way.

“We raised some funds and we managed to get loads of medical supplies and stationery from my colleagues at HSDC.”

Kitted out with 60kg of supplies, Martyn and Dave flew to Banjul where they picked up their four-wheel drive and prepared for their trip.

They were then met by the High Commission for breakfast and a health and safety check before setting off to their first stop.

Martyn continued: “We visited our first school in Kiti, run by a British woman called Sandy Sanyang. The school is a part of her charity called Goal for Gambia.

“Sandy set up the school for 500 kids and basically funded everything. She put the teachers through the training and she’s created a sports department as well.

“All the children are from villages that are in walking distance, but some can stay at the school if they need to.”

Martyn added what an incredible experience visiting the school was.

“It’s amazing to visit, the children are all smiles and are really happy to see you and want to know who you are and where you have come from,” he said.

“Sandy has another school which we didn’t get to visit because it is a Christian school and it was closed for Easter, but we gave medical supplies there because they have first aid on-site, but they need the kit.”

From there the duo move onto Soma for their first stopover, where they visited a scout group.

Martyn said: “In Soma there is a scout compound which is run every Friday, but the children can stay there the whole time if they want to. This is supported by scouts in Hampshire which is amazing.

“We dropped off 14 filter bottles called ‘Water to Go’ which is great for when they go on their camps because it means they can drink out of the river and the bottle will make the water come out clean.”

The next project Martyn and Dave visited was in Basse, where they donated to a large community medical centre.

“We met the guy in charge and handed over a huge bag of medical kit and it was well received,” said Martyn.

“They were very grateful especially for the rubber gloves and the medical wipes. Things we think are quite small are huge for them – they were over the moon!”

The pair donated the last of their stationery supplies to two schools in Fatoto.

Reflecting on his trip, Martyn said: “The people are so friendly. What was obvious from the outset was just how friendly they all are.

“You wave at someone from the car and they wave back and smile. They aren’t expecting anything from you. They’re just interested in what you do and where you are from.”

Martyn added that he couldn’t have made the trip as successful as it was without the outstanding support from staff at Havant & South Downs College, who rallied together to donate medical and stationery supplies.

To read Dave Love’s blog on the trip and his further travels, visit www.loveadventures.co.uk/around-the-gambia-blog/