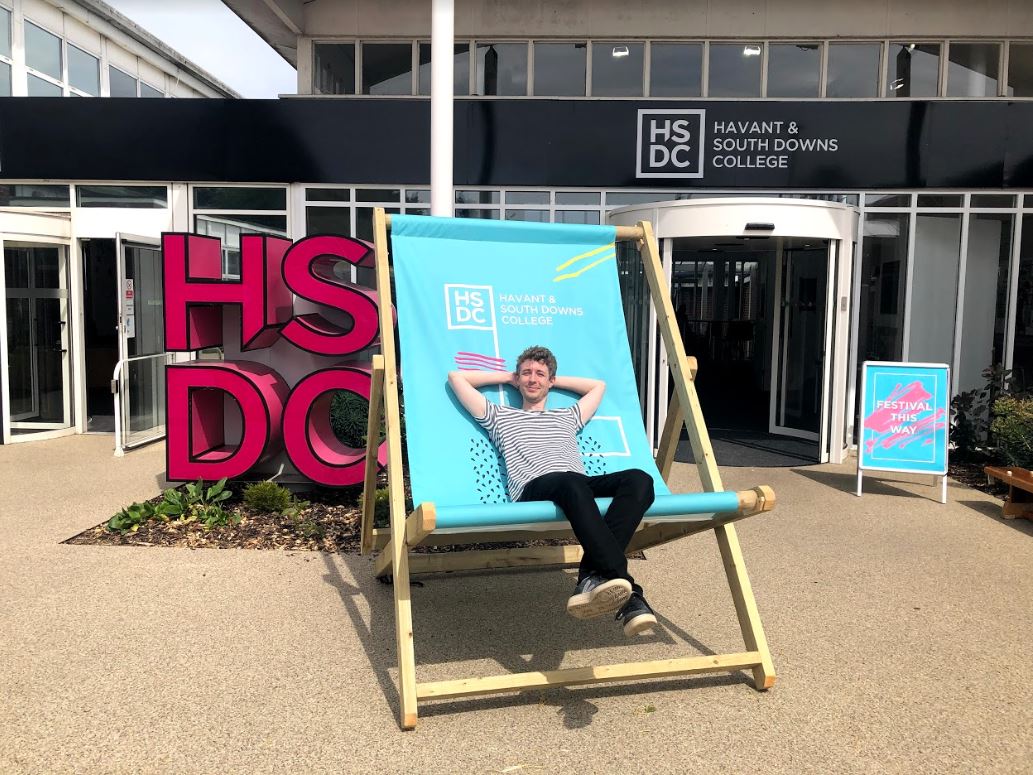 On 10 July, new students joining HSDC in September came to the College to take part in workshops before enjoying an afternoon of live music, silent disco and food stalls.

This year’s New Student Festival proved to be even more of a hit, however, when special guest Matt Edmondson made an appearance to perform a DJ set.

Speaking about returning to the College he attended 17 years ago, Matt said: “It feels really weird to be back to be honest with you. I lived in Portsmouth when I studied here and got the train in every day, and normally when you get off the train somewhere you haven’t been in ages you have to get your bearings, but today it was immediately imprinted on my brain.

“It’s weird but I’m really excited to have an explore around. Obviously, lots has changed -you’ve merged with South Downs College and there’s new teaching blocks, but a lot of the things I do remember are still here.

“I am really looking forward to playing some music for the New Student Festival, it’s a really nice day and it’s just very strange to be back in this courtyard where I must have eaten lunch so many times!”

Prior to his success at BBC Radio 1, Matt studied A Levels at the former Havant College in Media, English Literature and Drama. And Matt says he still uses a lot of those skills today.

“I had such a good time here it’s nice to be back,” Matt adds. “I learnt a lot from my Media course especially, I had a lecturer called Kev who was really good at instilling this sense into us that the Media industry isn’t a world that’s impenetrable. I loved those classes so much – I still think back to things I was taught in those sessions all the time when I’m making content for the radio and for the telly.”

Matt added that he made friends at College that he is still in touch with now and are ‘still a big part’ of his life.

Offering advice to students considering working in the media industry, Matt said: “Don’t feel the pressure to figure out exactly what you want to do right now but try to get as much experience as you can.

“Even if you want to be in front of the camera or behind the camera, or in the editing suite or doing the logistics, understanding how every other person does their job is really useful. Arm yourself with lots of knowledge of every aspect of the Media industry.”

Check out some of our Media courses: