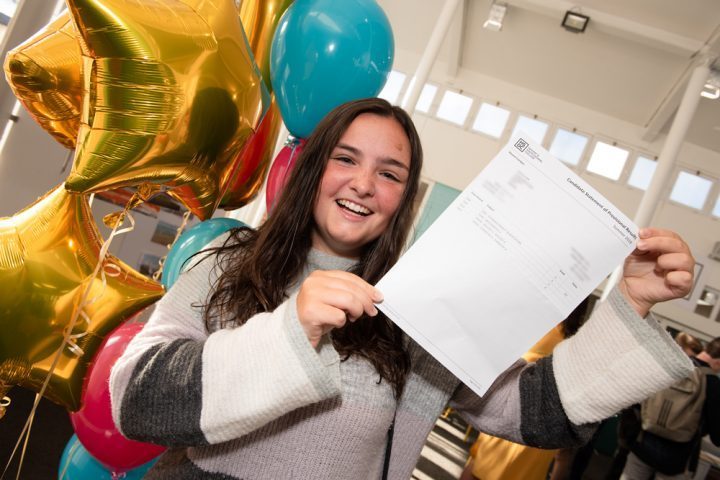 HSDC students have been celebrating today as they opened their eagerly anticipated results.

Figures have shown that students across all three campuses achieved high-flying results, with an overall pass rate of 97% and 54% of students securing the top A* to B or equivalent grades.

Zoe Parsons was amongst the happy students as she secured four straight A’s, in biology chemistry, mathematics and an Extended Project Qualification (EPQ), meaning she has gained a place at Hull York Medical School to study Medicine. Previously from Horndean Technology College, Zoe was worried that she wouldn’t get straight A’s and was relieved and delighted at her results, especially as it’s her dad’s birthday today.

She said: “I will be the first doctor in my family! How cool is that! I am excited to be moving on to study medicine even though it’s a long course, it will be worth it in the end.”

Daniel Claydon was one of the first students in to collect his results this morning, he was thrilled with three A*’s in mathematics, further maths and physics.  He also secured Distinction in his mathematics advanced extension award.

He said: “It’s been good fun at HSDC, it didn’t feel like a lot of work as I loved the subjects I took.  The teachers are happy to offer extension opportunities and they really push you to achieve what you can and not settle for mediocracy.”

Daniel has secured his place to study Mathematics at Oxford.

Daniel was joined by classmates Michael Clasby and Samuel Walker moments after opening his results and it was very apparent that these three students had worked together and had all achieved fabulous results, there was a little friendly banter and some competitive comparing of results. 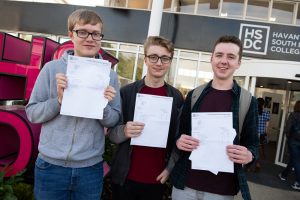 He said: “The College has been very supportive in my journey to achieve my goal.”

He said: “My time at HSDC has been thoroughly enjoyable and I am now ready to move forward towards my career.”

Samuel is moving on to study Engineering at Cambridge.

Jess Vence-Gunstane was also celebrating today as she achieved AAB in biology, PE and chemistry. Jess, previously from St Edmunds Catholic School, is moving onto the School of Veterinary Medicine and Science at the University of Nottingham.

She said, “The level of support was amazing and HSDC helped me through the UCAS process which can be quite tough”. Jess has wanted to be a vet since the age of four and her results today secured her next step to reaching her childhood dream. 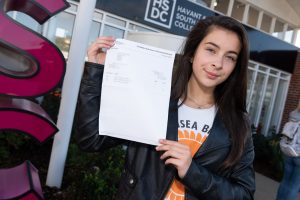