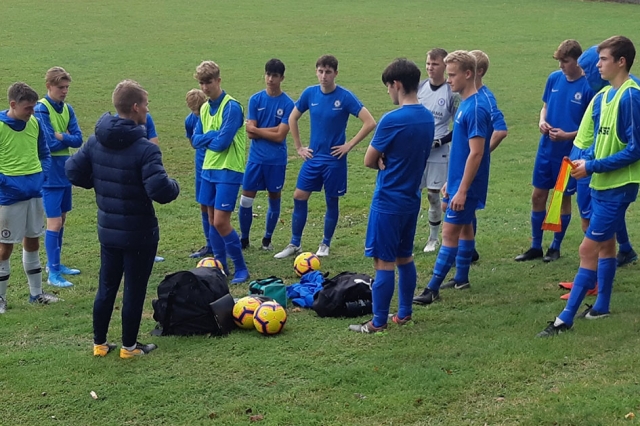 Following a narrow 3-2 defeat in Alton’s first game away to Brockenhurst College last week, Alton held their first home game of the season versus HSDC.

Manager George Butler explained ‘having more time together on the training pitch, our expectations were high and a win was all we were willing to accept’.

‘The boys lined up against a strong, physically capable opposition and after a tough opening few moments we managed to get a hold on the ball and begin to dictate possession. Our two central midfielders Doug and Owen played some dangerous passes to pin back the opposition defence, whilst our two wide players Max and George worked tirelessly both in and out of possession.

Midway through the first half, the ball broke to central midfielder Doug who struck a precise left footed shot from 25 yards which crept in to the bottom corner. Unfortunately, the team’s concentration slipped from the resulting restart and Havant pounced on this. A well-struck shot from their forward from 30 yards beat goalkeeper, Oscar, despite his best efforts in getting a hand to the ball

Thankfully, the midfield unit was still able to control the game from the middle of the pitch and our frontmen Lewis and Dan continued to look dangerous. Alton College pressure began to tell, and after great work out wide, it was wide player, George, who followed in to tap in a cross from close range.

The game continued in the same fashion until half-time where it stayed 2-1. Overall, the first half produced some lovely football from our boys and we looked very much in control.

In the second half, HSDC began to put serious pressure on the Alton College defence and the game became more intense. Wide left player, Max, was playing despite still recovering from illness and so was replaced early in the second half for Josh. It was Josh who pounced on a lofted pass from centre-back Charlie and was brought down in the box for a penalty.

Striker, and captain, Dan, stepped up and despite slipping as he kicked the ball, scored the penalty to give Alton College a deserved 3-1 lead. The boys continued to resist further pressure from Havant but we found it difficult to get back in to our passing game. However, after a few tricky moments we broke forward and from a wide set-piece, Charlie was able to bundle the ball over the line to extend our lead to 4-1.

HSDC refused to give up, and after an aerial ball down the middle which the defensive unit failed to deal with, their striker volleyed the ball past the outstretched dive from Oscar.

With only a few moments to go, centre-back, Charlie, received his second yellow card for a late tackle and Alton College saw the game out with 10 men.

The full time whistle brought to an end an entertaining game of football that finished 4-2 in our favour.

Overall, following a dominant first half display where we played some football that would be worth paying to watch, a win was fully deserved. Credit must be given to Havant who produced some dangerous moments and had a tremendous attitude throughout the game and will cause plenty of teams in the league some trouble’.