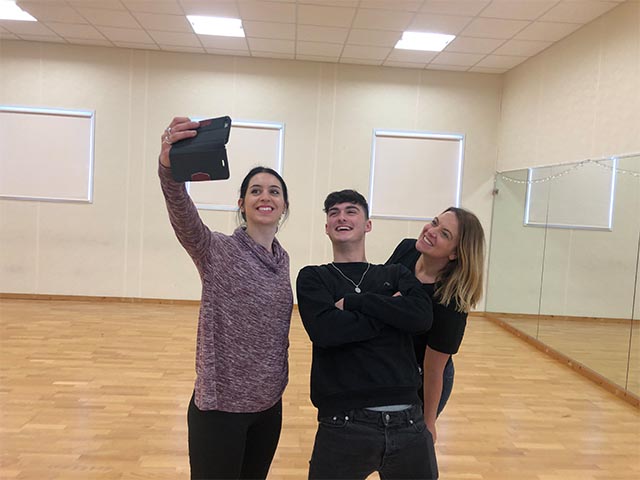 From wanting to be a firefighter to appearing in the final 10 of the BBC’s The Greatest Dancer, Ross Robertson has found his passion in life and, at the young age of 19, is on his way to do great things in the dance world.

The youngest of six, Ross grew up wanting to be a firefighter but his passion for dance was ignited when he came to South Downs – he “found a renewed love for dance I never had before”. His choice of college came about because of an older brother who studied music and then dance at South Downs, “My older brother was a very big inspiration to me in my dance world and when I was growing up he was studying full time at South Downs.” Ross would come to see his shows and, when looking for a college, Ross had his mind already made up: “I knew that South Downs was the place…you grow to be part of the family when you come to South Downs.”

Ross was able to try a variety of dance styles during his studies, “my three years were absolutely amazing. The progress I made – I didn’t even know how to point my toes when I first came here…I did 11 years of hip-hop before I even started ballet and contemporary…Being exposed to different styles has made me the person I am today.

“My time at South Downs was amazing. They did so much for me and gave me so many opportunities and so many dance platforms to perform on”. One of the best moments was a performance in Woking, the ‘Winston Churchill piece’ – “some of the best choreography I ever made up.”

Ross and his dance partner Travis, who he first met at the 2015 Dance World Championships, performed together at the street dance school Shake. When they first auditioned for The Greatest Dancer they decided to be themselves rather than portray a character: “We knew that many of the other acts were going to portray characters that are not themselves; we wanted to get across that you can be yourself and can have fun doing that on stage in front of a live audience.”

Auditioning for the show was nerve-wracking: “you only get one take. If you mess up your audition you don’t get to do it again.” And, if the mirrors open, there is then the ‘recall’ stage where the dance captains make their choice.  The final 12 are chosen for the live shows; “thousands of people auditioned so it was very hard to get through.”

What does the future hold for Ross? His future looks bright and he has several options: “ideally Travis and I will be very busy after the final of The Greatest Dancer, I really hope that we find secure work after this because, in the long run I want to work as a professional dancer in this industry.”  Whatever Ross decides he would like to do, he has the talent and ambition to achieve great things – we wish him the best luck in the world and look forward to following his career.

Click here to learn more about our Creative Industries programmes.