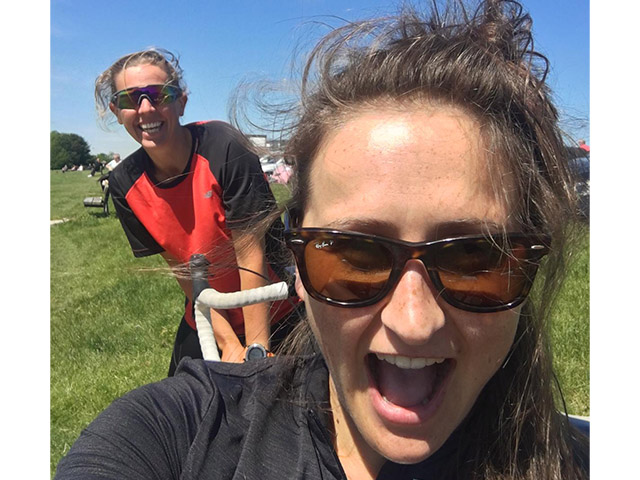 Staff members Kirsty Harley and Katie Spooner participated with other Portsmouth Hockey Club team members in a challenge to raise money for NHS Charities Together. The competition – running, cycling or walking 60 minutes each day for the month of May – aimed to cover the 3200 miles between Portsmouth, UK and Portsmouth, New Hampshire in the US. The team competed with nine Hampshire rugby teams and was the only co-ed, mixed-age team to take part. All of the mileage was completed in their local area or at home on spin bikes and turbos, and logged using the Strava app with a spreadsheet recording the information provided.

Not only did the team smash through the finish line but they made it down the US coast (mileage-wise) close to New York City, with a total of 3424 miles in just 30 days.

Kirsty Harley, HSDC Sport Maker and DofE Coordinator, is ecstatic at their achievement:

“We finished first! There was a fantastic feeling in the last week. As a team of 25, we kicked on and saw everyone going out every day. It’s great to finish, although it’s sad that the month is over. It was hard at the time, especially as the race went on. I was getting more and more physically exhausted and trying to fit it in with working at the same time.

“A couple of days before the end, the organisers asked us if we wanted to call it a draw! We said we would push on and see who could clock up the most miles toward the goal. (Fellow staff member) Katie was out at the time that we reached 3200 miles – which was at 9.52am on Friday (29th) so was awarded the golden mile award. I cycled the furthest out of the team at 227 miles (454 in real life as cycling counted as half in the mileage score).”

To date, the Club have raised £720. There is still time to help them celebrate and contribute to their worthy cause: https://www.justgiving.com/fundraising/portsmouth-hockey-club-uspgreatrace20.