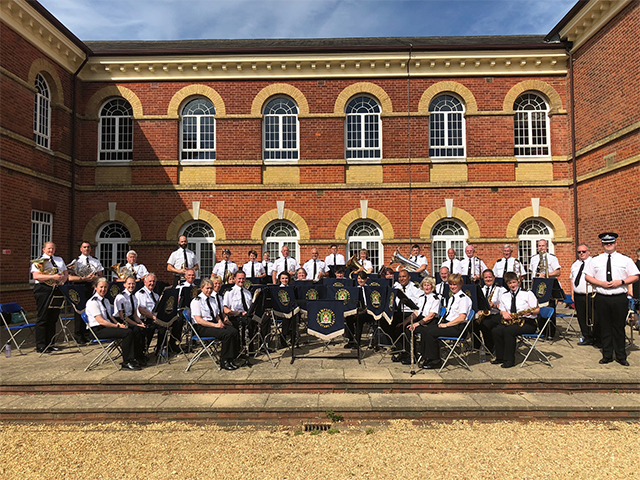 Normally members of the Band of the Hampshire Constabulary get together to practise on Tuesday evenings. They would also be busy performing at concerts all over the south of England, northern France and throughout the world. But these aren’t normal times.

The Band, established over 120 years ago, is composed of serving and retired staff, both police support and their family members, as well as, on occasion, players from outside the Force. It is a military-style concert band consisting of woodwind, brass and percussion. The Band plays an extensive repertoire and, over the years, has helped raise thousands of pounds at their concerts for charity. All members are volunteers.

Julie Davies, an administrator for HSDC’s MIS/Data Management Team, is a Cornet/Trumpet player. She has been playing in bands since she was 12 years old and joined the Constabulary Band eight years ago. She explains what a difference this year is compared to the past:

“We performed at Police Open Day last year in June. Unfortunately, we will not be able to be there this year. It’s such a shame as this is a great free event for families.

“Usually we are very busy with concerts all over the south of England. Most years we go to Northern France in November for the Remembrance Ceremony at Thiepval, supported by the Royal British Legion.

“One of my own great achievements was playing at the Royal Albert Hall in the Brass Band Championships of Great Britain and travelling across the USA from New York to California and playing in Disneyland Bandstand. Another very memorable occasion was playing The Last Post during the Remembrance Parade organised by the SPS Uniformed Services Team. It was a very touching moment to play at the South Downs Campus Balcony Cafe for all members of staff.

“There is no sign yet of the Band getting back together in person as it is complicated keeping distance in a practice room/concert. In the meantime, we recorded pieces onto YouTube dedicated to the NHS and the Police Force.

“It’s tough to keep playing at home on your own without 40+ support around you. I look forward to seeing my bandmates again soon – in person that is!”