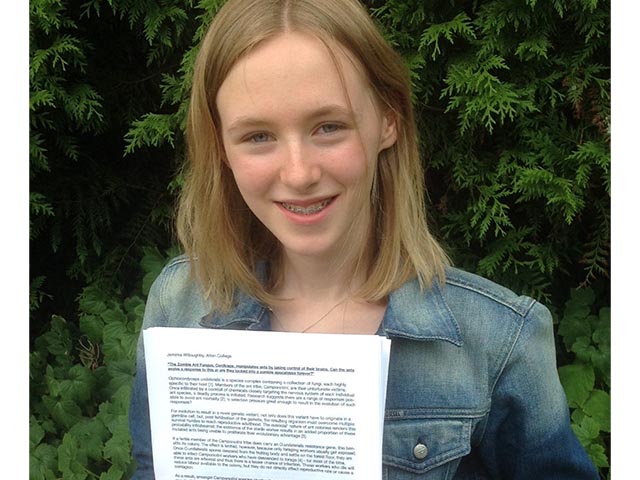 Set up in 1999, the competition has the aims of giving first year students the opportunity to develop independent study skills by researching and writing on a topic they are personally interested in as well as supporting teachers to provide challenging extension work for talented students. Winning entries are chosen based on several criteria, including originality of thought and breadth of research and source materials.

Competitors had to submit a 2,000-word essay from a choice of set questions. Jemima’s prize-winning essay question was: ‘The zombie ant fungus, Cordiceps, manipulates ants by taking control of their brains. Can the ants evolve a response to this or are they locked into a zombie apocalypse forever?’

A condition of the competition is that the main focus of the essay must not be material previously or currently being studied as part of the student’s curriculum. The judges were unequivocal in their praise of Jemima’s essay:

“The standard of entries was high, but the judges felt that your essay stood out for its clarity of argument, stylish prose, level of research, and originality of thought.”

Jemima, who is entering her second year in September, is excited to have won this year’s prize:

“When I found out about the competition, I thought it would be a great experience to have a go at writing a scientific essay. There were a couple of possible options but I decided to write about fungi because I knew little about this fascinating area of Biology.

“I am delighted to win the Kelvin Science Prize; it was brilliant to receive this kind of praise from the Cambridge academics. I’m planning to study Biology at university, so winning the prize has really boosted my confidence.”