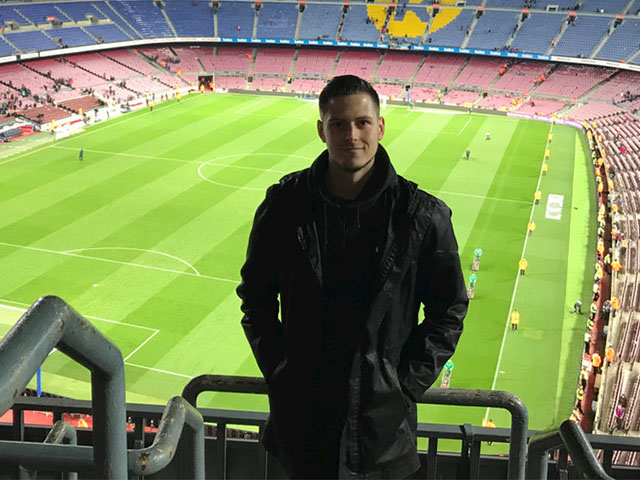 Former student Matt Kimber has been busy since he left HSDC in 2014.

At HSDC, Matt was part of the Football Academy and received his BTEC in Sport. He went on to receive a degree in Football Studies from Southampton Solent University. Whilst there, he became interested in the scouting and recruitment sector and, upon graduation, found a voluntary role with Wolverhampton Wanderers as a video scout. After four months he moved into a paid position.

Video scouts for major UK football teams play an essential role in player recruitment. In the last few years, the Wolverhampton Wanderers have put in place a sophisticated scouting and recruiting process. Video scouts put in numerous hours watching and analysing potential players to ascertain those that meet the Club’s current requirements. This information forms the basis for the start of the recruitment process.

Matt sees his current role as part of a multi-year plan:

“I’m still very early in my career and, at the moment, I’m just looking to improve. Going forward I do want to work my way into higher roles: Lead Scout, European Scout, Chief Scout and who knows, maybe Head of Recruitment someday!”

In addition to his position with the Wanderers, Matt started this year as a Data Reviewer with EA SPORTS, developer of digital interactive entertainment brands such as FIFA, NFL, Battlefield and The Sims.

Matt has plenty of great memories from his time at College,

“I made some friends for life and I also took a lot away from the course, which has benefited me in my career aspirations. I nearly didn’t get on the course originally due to my school grades. However, Ollie Jones, one of the Sport Lecturers, took a chance on me and I certainly felt I paid him back. I got Distinctions in both courses I took and ended up winning the Sports Academy Endeavour Award in my final year.”

What advice does Matt give HSDC students?

“I would say enjoy it, because those two to three years go very quickly. Take advantage of the courses offered to you. Although I’m involved in a scouting role now, and that’s where I see my career going, I’ve benefited from doing my FA Coaching Level 1 and the FA Refereeing qualification.”