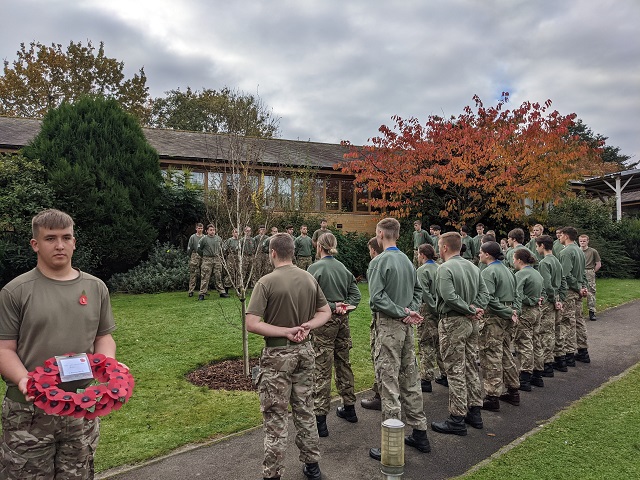 Hundreds of staff and students gathered to honour and commemorate the sacrifice made by members of the Armed Forces who have given their lives in the line of duty.

During the tribute, a wreath was laid at the memorial tree planted for Royal Marine Richard Hollington, who was the 300th British serviceman to die during the conflict in Afghanistan in June 2010. 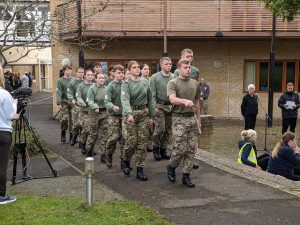 The former Public Services student is remembered each year at the College’s service, and the ceremony on 11 November was the 10th to take place in his memory.

Uniformed Services and Combined Cadet Force students paraded through the South Downs Campus to Richard’s memorial, in remembrance of all service personnel who have given their lives in wars and conflicts past and present.

Before the two-minute silence, commemorative wreaths were laid by Deputy Principal Richard Barlow and Chair of Governors Clive Dobbin.

Former course manager and Richard’s tutor Helen Hill read ‘In Flanders Fields’ to the gathered crowd, followed by ‘For The Fallen’ read by lecturer Oliver Jones.

Reflecting on the service, Helen said:

“I think it’s a really poignant occasion at College, you see the students all grown up for 10 minutes and they stand so tall and proud.” 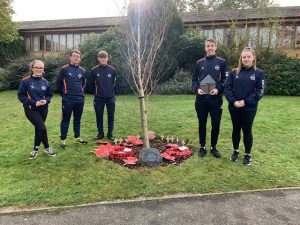 The College fell silent for two minutes of reflection, after which the Richard Hollington Award was presented to a group of students who had shown great care for others throughout lockdown.

Students Millie Morton-Scott, Andrew Palmer, Milly Churcher, Ben Wilson and Jack Carson collected the award on behalf of their group which organised a collection for PO9 Foodbank and raised hundreds for Rowans Hospice by running, walking and cycling the distance from Portsmouth to Rome and hosting a FIFA tournament.

“I am incredibly proud of all of our students. Our Uniformed Services students and staff put on an extremely poignant service and I am always hugely impressed by the respect shown by all of the students that attend the ceremony.

“It was also a real honour to be able to award the Richard Hollington trophy to the students who put so much time and effort into supporting their local community during lockdown and they are extremely deserving of this award.”

The service ended with children from Little Faces Nursery placing crosses at Richard Hollington’s memorial before the Uniformed Services students marched off to a round of applause from the audience.