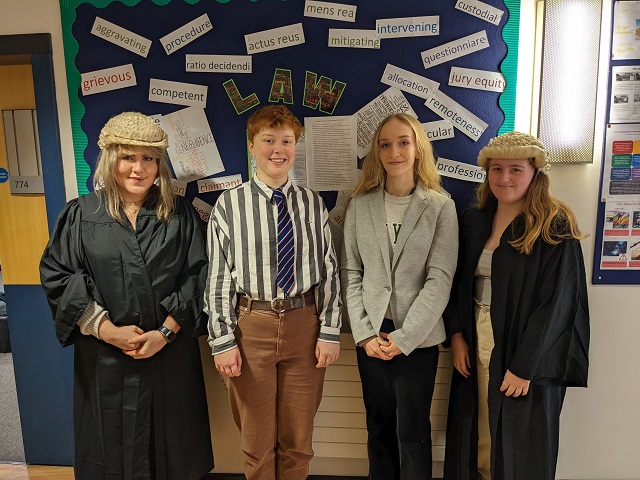 A mock trial at HSDC Alton saw 21 students get into character to explore criminal justice and experience how a court case might happen.

After weeks of preparation, students gathered in the Martin Read Hall to play their part as barristers, witnesses, defendants and jurors in a mock criminal trial scenario.

HSDC Alton students would usually take part in an external competition, but after this was postponed due to Covid-19 teaching staff decided to host it on campus.

The group really threw themselves into preparing for the event and learning their witness statements, before getting into character on the day and dressing up in gowns and wigs.

“I want to become a barrister. I really enjoyed it, and I still want to pursue my career goals!”

In the Bar Mock Trial scenario, student Poppy Gibbons played the defendant who was accused of grievous bodily harm, and the victim even turned up on crutches.

First-year A Level Law student Christina Furtuna was the defence barrister, and is interested in a career working in contract law. Christina said:

“It was good, I was a bit nervous when we did the practice run but I felt better in the real thing. I read the statements over and over again – I heard the prosecution won last year so I was nervous!”

Christina’s preparation did the trick however, as Poppy’s character was found not guilty after the 12 jurors deliberated for five minutes.

“The Bar Mock Trial gives students an opportunity to see how a case develops from start to finish, with the event culminating in a mock trial scenario.

“It provides students with a feel for not only studying law further, but a legal career, which for many of them is the end goal. It is great to watch the students develop their knowledge and confidence as the case progresses!”