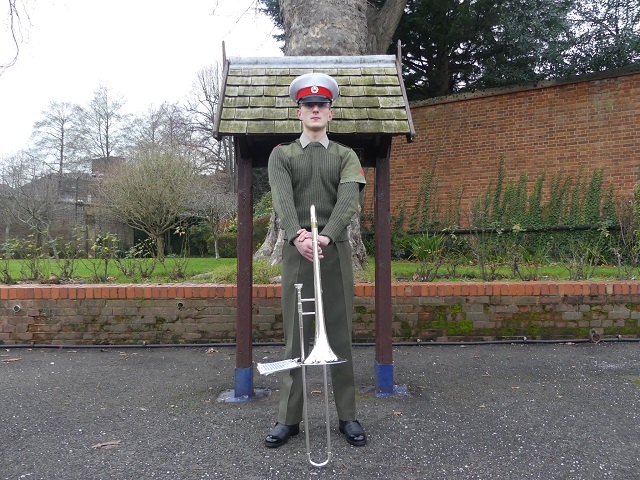 An unusual career path has led to “the best job in the world” for an ex-student who followed his musical passions after leaving HSDC Alton.

Having played the trombone since he was six, James Edwards loved the idea of making music his career and has followed his dreams to become part of the Royal Marines Band Service.

When James was studying at HSDC Alton, he knew he didn’t want to go to university so began looking for alternative options to continue his training and kickstart his career.

Clanfield resident James, who studied A Level Biology, Chemistry and Music and a BTEC Subsidiary Diploma in Jazz Performance, said:

“I went to HSDC Alton because the music department had a really good reputation, and my incredible music teacher David Gibson inspired me to pursue music as a career.

“Obviously living in Portsmouth I’d always been aware of the Royal Marines Band. It’s always been at the back of my mind.

“When I started college and everybody was applying for university, I could just tell it wouldn’t be for me. I realised what I wanted to do was staring me right in the face so I did two taster courses and a week of work experience with the Royal Marines Band Service.”

After online auditions, interviews and a fitness test, James was over the moon to be accepted into the service and embarked on his basic training at the Commando Training Centre Royal Marines in Devon.

James threw himself into the experience and is now attending the Royal Marines School of Music at HMS Nelson, spending his days performing music with his colleagues and striving to get better at trombone, alongside singing lessons.

“I had to learn how to practice effectively. Suddenly I have gone from someone who enjoys music in their spare time to being paid to be good at it. You have to take it a lot more seriously. Now I’m up to speed, I really enjoy it.

“For me, it’s genuinely the best job in the world, you can’t ask for anything better than that. It’s really nice being part of something that’s bigger than yourself. Not only part of the Royal Navy, we are part of one of the fiercest fighting forces in the UK: the Royal Marines.”

James is hoping he will have the opportunity to travel with a band, perform at the Royal Albert Hall and work his way up the ranks, with his sights set on becoming a conductor one day.

We wish him the best of luck for the future of his career and hope his story inspires current and future students at HSDC to follow their dreams.