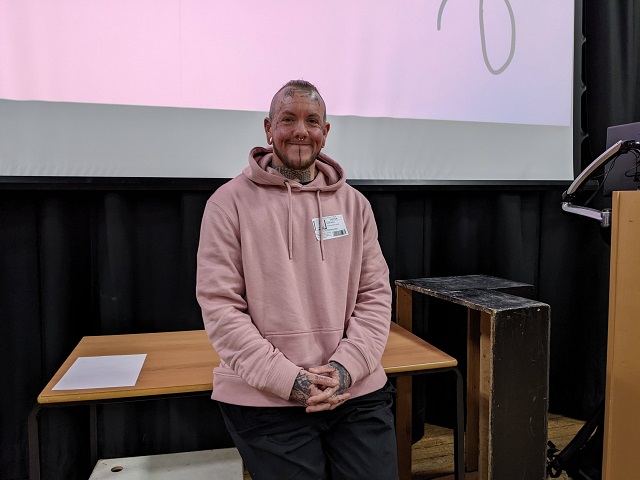 An inspirational visit from a transgender Portsmouth artist has encouraged HSDC Havant students to express themselves through their art.

Artist, activist and trans man Samo White was invited to put on a talk in the Studio Theatre, inspiring students with stories of how his work has taken him around the world.

Samo, who came out as transgender six years ago when he was 30, has been working on I EXIST, a book and exhibition project aimed at celebrating trans bodies.

During the lockdown in 2020, Samo was in bed after spinal surgery and began to draw other people, rather than the self portraits he had produced before. Samo said:

“That’s when it occurred to me there’s not much representation of trans people in the art world. This is what started I EXIST – I think about this book now and can’t help but grin and think about how amazing trans people are. 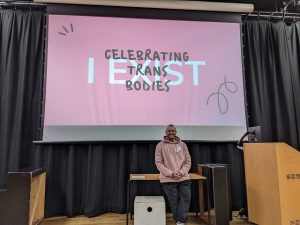 “Part of my mission is to normalise what we are and what we have become and celebrate that. My plan is to keep growing this with messages of love and positivity, not just for people in my community but for everybody”

Samo’s street art took him to New York, as he was one of the artists sponsored to fly out and paint the streets during WorldPride in 2019.

He discussed his journey from starting as a tattooist, to creating street art and huge mural projects.

Students and staff asked a variety of questions after the talk, including which artists have inspired Samo along the way and where they can see his street art in Portsmouth.

Samo, who is an ex-student of HSDC Alton, said:

“Having that one-on-one interaction with the students really means a lot to me. I have learned a lot along the way and I have always used art as a really positive tool to express my transition and help others.”

In the afternoon, Samo visited an A Level Fine Art lesson to put on a mini workshop based around portraiture.

The students paired up then sketched with a limited time frame and drew how they felt about each other.

“I’ve been trying to get Samo in for quite some time as I know how much the students love his work and respect what he stands for.

“Seeing an artist in person, hearing about their journey and development as an artist is vital to any creative. Samo’s message of love and positivity through art is refreshing and I hope will inspire my students to carry on being creative in the same way.”

Find @mister.samo on Instagram to see some of Samo’s work, and find out about HSDC’s Art & Design courses.