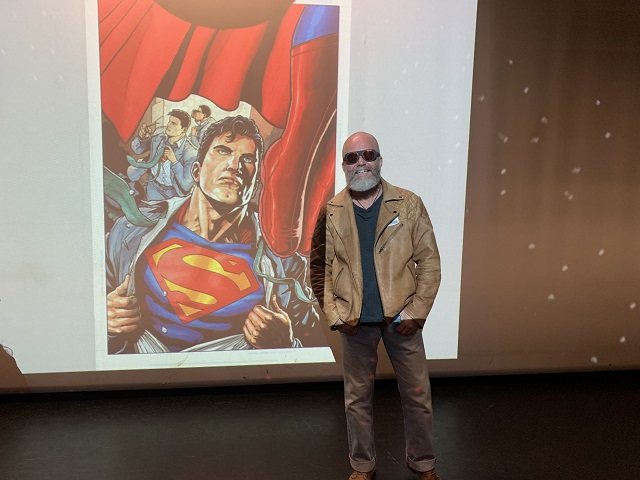 Aspiring artists were inspired by a guest speaker’s 30-year career drawing comic books for top publishers including Marvel and DC.

A packed theatre at HSDC South Downs greeted comic book artist Ian Churchill, who has had a varied and interesting career drawing much-loved heroes including Superman, Batman and more.

Ian shared the story of how his career began with a graphic design apprenticeship, which taught him the importance of meeting deadlines, before he took his passion for comic books to the next level.

A chance encounter with the editor of the X Men at a convention in London kicked off Ian’s career when he got the opportunity to draw his first strip with Beast from the comic.

“I was in the right place at the right time and got a foot in the door. My dream was to work for Marvel Comics and I did it by the time I was 23.”

Over the past 30 years, Ian has worked on hundreds of projects including being one of the first Deadpool artists, creating his own comic book characters like Marineman and taking on commissions from comic fans.

Although Ian now mainly works digitally, students were fascinated by the origins of Ian’s work, physically being posted the frames to draw into, followed by sending his work by fax to the offices in America in later years. 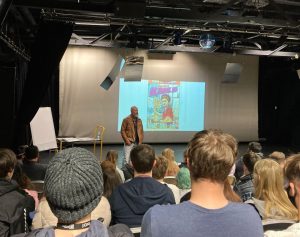 On getting into the comic book industry, Ian said:

“There’s no right way or wrong way to do comic art. You need to be efficient, dedicated, competent, hit deadlines and be friendly.

“When you get an assignment, you can draw it how you want to, in your own style. If you draw like everybody else, you’ll get lost in the shuffle.

“If you’re lucky enough to do this for a living, when you do get in it becomes a real job. This is when the fun kicks in and stops at the same time because you have to meet deadlines and get it right.”

This was the first time Ian had spoken to students about his career, and although it was daunting at first, Ian enjoyed it and took a variety of questions from HSDC students at the end of the talk.

He gave advice on dealing with artists’ block, and explained to the digital generation how he would visit the library to take photocopies of reference images when he didn’t know how to draw something.

“Ian lives locally, working in a highly competitive creative industry which will hopefully inspire the students by giving them the opportunity to gain an insight into how the comic industry works.

“Also, he explained his creative process of researching, planning, creative undertaking, meeting deadlines, and the dedication and the passion you need to do something you enjoy, plus a little luck.”

If you’re interested in a career like Ian’s, find out more about our Creative Industries courses on our course finder, and you can see more of Ian’s artwork on his website.