For the second year in a row a media team from Havant & South Downs College has secured a place in the World Skills final.

Last year saw a team of four win their place at the final with their Motown music video, eventually placing in the top five. This year, Level 3 Extended Diploma in Film and TV students Sam De-Vos, Will Dentten, Jonny Barnes and Ryan Honey succeeded with their World Skills gif.

Speaking about the process of making it to the final, Will said: “We were set the brief of making a gif for World Skills, something that reflected the competition. We had to come up with three concepts and a detailed storyboard for one of the concepts.

“That was the first round, then for the semi finals we had to make the gif, which Jonny did. We then made a PowerPoint explaining the idea behind our gif which we had to present to five judges at Hinkley College in Leicester.

“We have done mock presentations in the past but nothing on what we have created ourselves.”

The team said they were ‘chuffed’ when they found out that they had made it to the final when they returned from their summer break.

The four students will be practising their craft up until the final in November when they will be set one final task to complete. 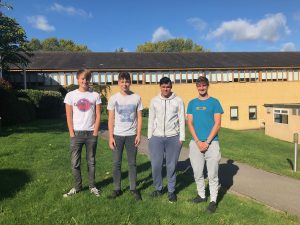 Speaking about their course, Jonny said: “The course is really good at making you do a wide range of things. We have done everything from music videos to documentaries.

“It is good if you don’t know what are of media you want to do because you get to do a bit of everything.”

Lecturer Dave Cook said: “We are really proud of the students for making it into the final. This is the second time we have entered the competition and we have made it to the final on both occasions.”

And Dave has his sights set even higher this year. He continued: “This time we know a little more of what to expect from the competition and we are determined to get a top three placing.

“We are aware we are the only department representing HSDC at this prestigious event and hope to do the College and the Media Department proud!”

Director of Curriculum Paul Carter Said: “It is so positive to see the success of our creative film production students and how they have stepped up to the challenge of World Skills UK.

“The opportunity to compete at a national level and to then reach the final two years in succession is testament to the ambition of the students to gain real world employable skills and the support our fantastic lecturers give to them to achieve this. I am sure the students and staff will do the College proud like last year.”

The World Skills UK Final will take place from 15-17 November at the NEC Birmingham.

Read about our World Skills Media team from last year.