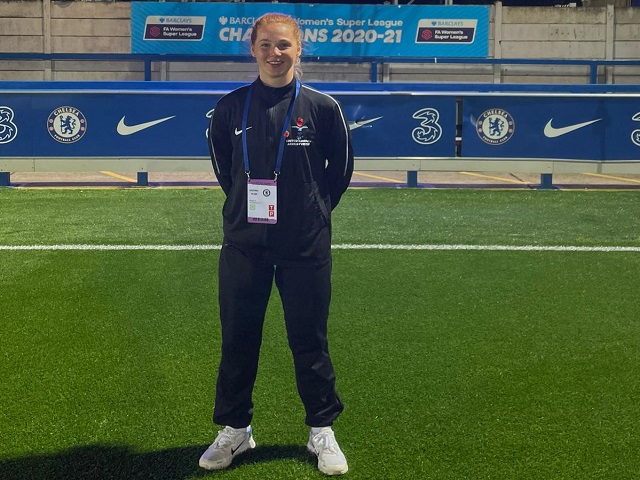 A HSDC lecturer has spoken of her gratitude and pride after representing the UK Armed Forces football team at a Remembrance Day match.

Jade Widdows, who teaches Mathematics in Vocational Foundation Learning and Sport & Public Services, was given the opportunity to play in a fixture against Chelsea Women FC u21 on 11 November.

She was selected for a team made up of elite players from the Army, RAF and Royal Navy thanks to her efforts as a reservist Naval Officer at HMS King Alfred.

Talented football player Jade, who is also on the Portsmouth FC squad, was overjoyed to be chosen for this match, and took part in a training camp at HMS Temeraire to bond with her teammates before taking to the pitch on Remembrance Sunday.

This honour has a special meaning to Jade, who said:

“Being able to represent UK Armed Forces is a fantastic achievement in itself, this is my first selection, being new to the Armed Forces and to make my debut on such an occasion is really special to me.

“I feel lucky to come from a Naval family as I have a deep understanding of those who paid the ultimate sacrifice and the importance of remembering what they gave in order for us to enjoy the freedoms we all have today.

“My great uncle, Percy Boylett-Long died on HMS Hood, famously sunk by the Bismarck. He was aged only 17, the same age as many of our students which is frightening to think.

“I am the fourth generation to serve and the first female in my family, a tradition I am very proud to keep going.”

Jade, who has worked at HSDC for almost three years, completed an accelerated officers programme over the summer for two months at Britannia Royal Naval College in Dartmouth, which involved sea time on the aircraft carrier HMS Prince of Wales for three weeks.

On her reasons for joining the Royal Navy Reserves, Jade said:

“My whole family have been in the Royal Navy and it’s a great opportunity to do my bit, serve my country and gain some fantastic experiences and qualifications along the way.

“The College has been a tremendous support and continues to be so. Without my wonderful colleagues, none of this would have been possible. They really have facilitated me to fulfil my ambitions with the Royal Navy in every way and I am forever grateful.

“Many of the opportunities I have had with the Royal Navy benefit the College, professionally I have been in receipt of world class leadership training at Britannia Royal Naval College and developed my confidence in high pressure situations.”